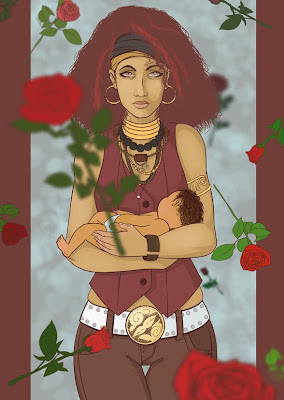 Communication Arts submission date is the 22 and i needed something to submit. I think i'm stuck with this style. lol. I can't see to develop something different and unique... Maybe it due time. But, i think this is it.

There were a few meanings behind this pieces before it actually got to this point. At first, i just wanted a do another pretty girl. But somehow the baby made it into the piece. Then it became this piece about how certain woman have amazing potential to do great things in the world, but for some reason or another, they had a child out of wedlock and now their future is completely gone or put on hold.

However, i need a foreground and background and for some reason, i felt like drawing roses falling from the sky. Its like a salute to the modern mother of the 21th century. The woman is of mixed decent, looks like Black and Asian and the baby is an even lighter tone. America is a melting pot, especially in the year 2010. Some people still want to stay within their own race and i understand the reasons why, trust me, a lot of the reasons are no where near being racist, however, i'm a firm believer in the crossing of cultures, ethnicities and diverse backgrounds.

Also, mothers these days have it extremely hard, especially those who are single mothers. Hate to a douche toward men, but guys are complete a-holes these days. Men were born with this amazing ability to fight for what stirs them. If nurtured correctly, a man can raise a family and protect his wife and his kids. If neglected and abused... lets just say woman get left the result of those actions a good majority of the time.

So to see a woman who is a single mother who is making it in the world without the help of a man is truly a feet in itself and should be hailed.

Hopefully i get into Communication Arts...