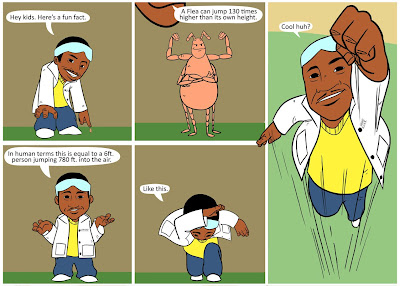 A few weeks back, i applied for a illustration position i found on Craigslist and they recently got back to me about it. I think they have a few other people in mind for the job, so in order to weed out the bunch, they asked that we do a comic strip (which what i'm assuming the job is actually going to be... making comic strips...)

They gave me this character, Grand Hank (which is also a tv show on the Philadelphia public channel.) The show is called, Science Lab of Grand Hank. Its like science show that tries to make science hip and relevant for kids in inner cities, especially Philadelphia, becuase thats' where they're stationed i suppose... Anyways, the strip is suppose to use their character in a "hip hop science" strip...

i don't fully understand how i was suppose to make this hip hoppy... maybe graffiti in the background i suppose, but i it was far out the way to do that, and plus they said that it didn't need to be extremely detailed... I think it came out alright.

judging from the tv show, if i get the job, i don't think it'll be a high paying job... but, any money at this point is dually needed. Anyways, hope you guys like this.