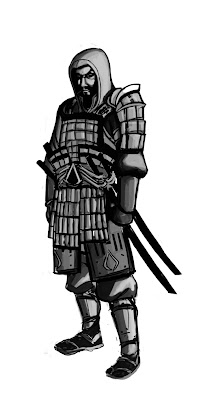 Brotherhood was such an amazing game, but having the game take place in the middle easter and then Europe, for 2 games. I really hope they change it up with the next installment. I understand Desmond is a white dude with some middle easter ancestry, and that there's no way that he could possibly have asian japanese roots too.... But i hope somehow they can tell a story with a japanese assassin.

The immediate conclusion when you think of Assassins Creed in Japan, is the guy should be a Ninja. Because they're agile and do assassinations in stealth, but ultimately i liked the samurai concept better. It has more to work with than a simple ninja outfit.

Anyways, i'm going to tune the concept some more and then, when i get my new baby, do a 3d model of the character. Its gonna be sweeeeeeeeeeeeeeeeeeeeet!